An easy recipe for mini old-fashioned sour cream donut muffins dipped in butter and coated in cinnamon sugar. These muffins are perfectly spiced, soft and delicious. Have these baked doughnuts for breakfast or dessert! 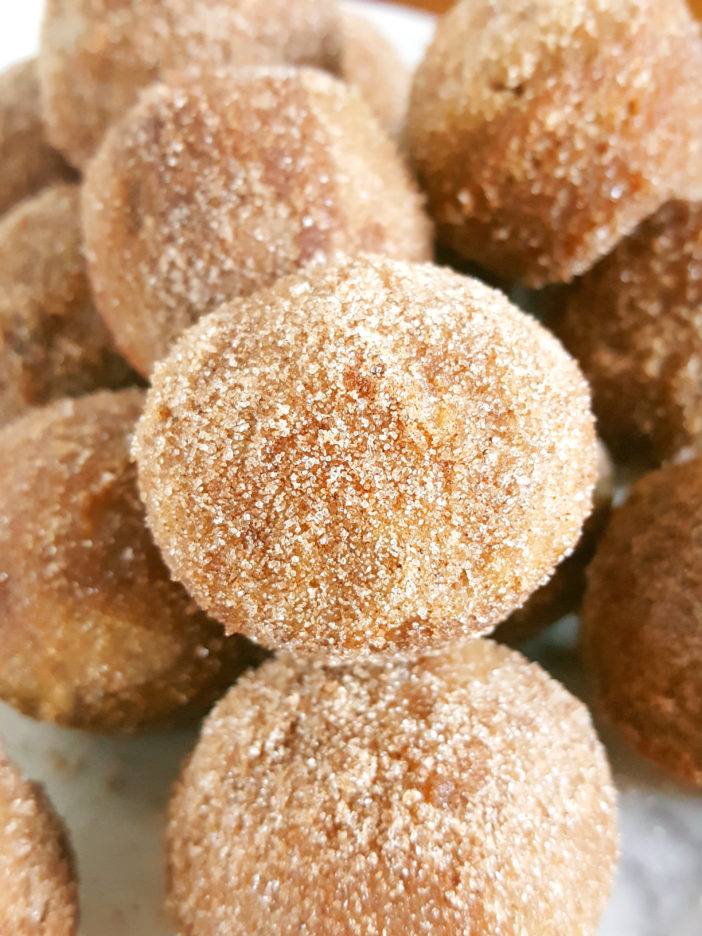 You don’t need a donut hole pan to make donut holes, you can use a mini muffin pan. I do, all the time.

This recipe is adapted from my mini sour cream donut muffins. The only difference is that those ones are glazed and these are coated in cinnamon sugar. Both are equally awesome though.

I am a cinnamon addict and donut muffins with cinnamon are one of my favorite things to eat, especially when they’re mini-sized. They’re poppable, fun to make, and so much fun to eat. I can’t get enough of them and neither will you! You’re gonna love these mini old-fashioned sour cream donut muffins. 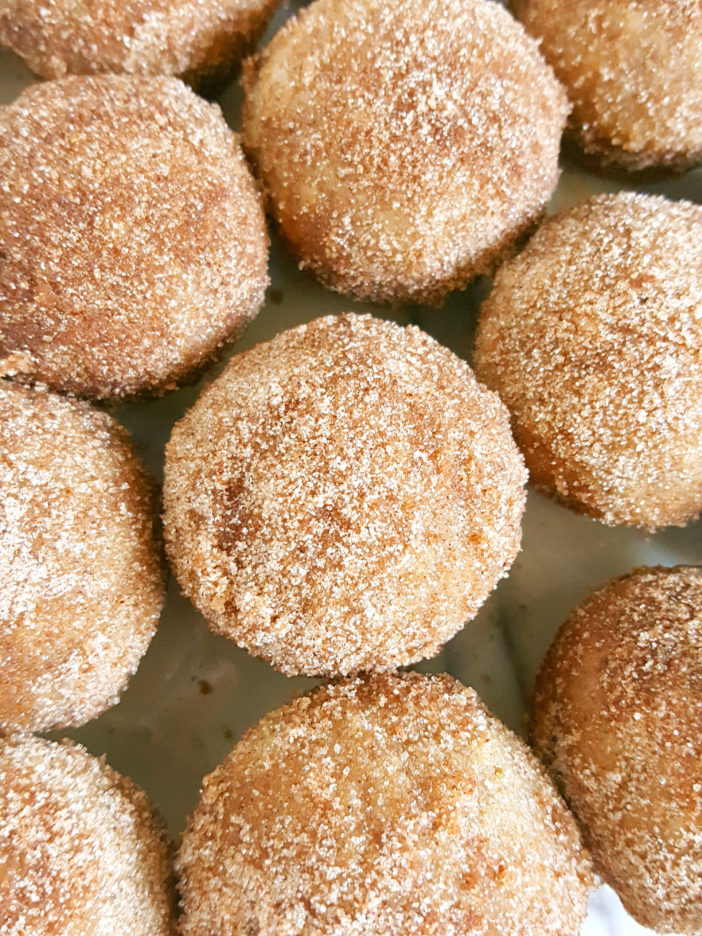 Making donuts in a mini muffin pan is really easy and much easier than making fried donuts.

This recipe only requires 15 minutes prep and the muffins only take about 10 minutes to bake. After that, you just dip them in butter then coat them in cinnamon sugar.

You’ll be surprised by how well these turn out despite the basic ingredients.

These delicious little bites are also known as snickerdoodle donut muffins, muffin tin donuts, mini muffin donut holes… The list goes on and on. But what you call them doesn’t matter. All you need to know is that they’re delicious! 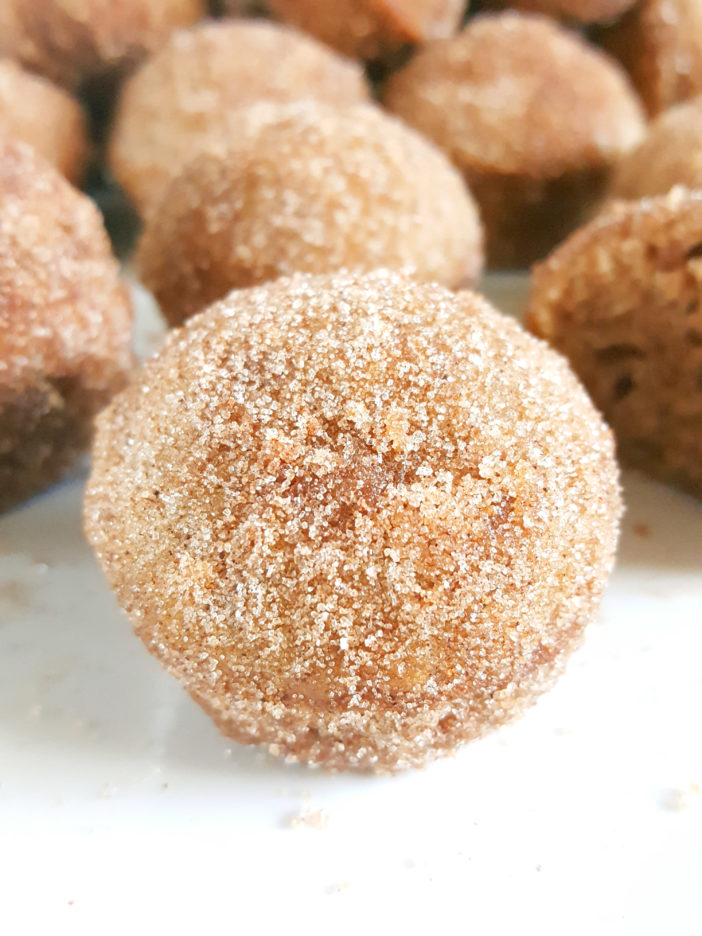 If you’ve never tried homemade donut muffins before, you are in for a treat! They’re exactly what the name suggests; a cross between a donut and a muffin.

And even though these sour cream donuts are baked, they’re just as tasty and satisfying as the fried variety, and they’re healthier too.

I remember the days when I used to pass up baked donuts just because they weren’t fried. I didn’t know what I was missing. You’ll never catch me doing that today though, especially if it’s a cinnamon sugar donut! 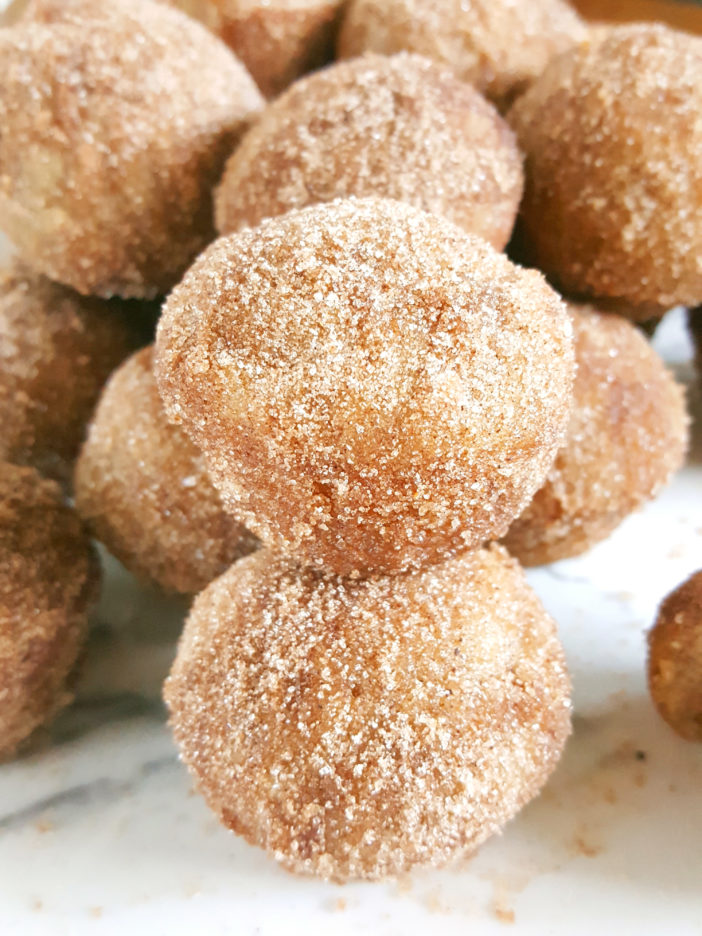 You’ve most likely had an old-fashioned sour cream donut before. It’s like one of the most common types of donuts and also the most popular.

These mini doughnut muffins mimic the flavor of those while still having the texture of a soft muffin. The tops are slightly crisp and the crumb is identical to that of baked cake donuts.

And the thing I love most about doughnut muffins is that they’re not greasy or oily, just soft and delicious.

You’ll notice that this recipe calls for a little bit of nutmeg which some of you may want to leave out, but don’t! Why? Because it complements the cinnamon so well, it’s not overpowering (I promise), and it’s authentic. Sour cream donuts almost always have nutmeg in them.

I have a passion for making (and eating) muffins, baked donuts, and anything cinnamon, so me creating this recipe was inevitable.

There’s another mini cinnamon sugar donut muffin recipe here on Beat Bake Eat, but unlike that one, this one is a little bit richer because of the sour cream. Both of them taste amazing though so it’s hard to say which is best.

The sour cream plays a huge role in this donut muffin recipe.  It provides moisture, makes the muffins soft, and gives them flavor too. Also, since it is an acidic ingredient it neutralizes the baking soda. If you do not have any sour cream on hand you can simply substitute it with full-fat greek yogurt.

The batter is slightly thick and a little sticky too so I like to use two spoons to get it into the mini muffin pan. I use one spoon to scoop the batter then the other spoon to slide it off and into the pan. It’s so much easier this way.

These baked sour cream donut holes taste amazing warm, fully cooled, and even better the next day because the cinnamon flavor is so much more intense. I love it. 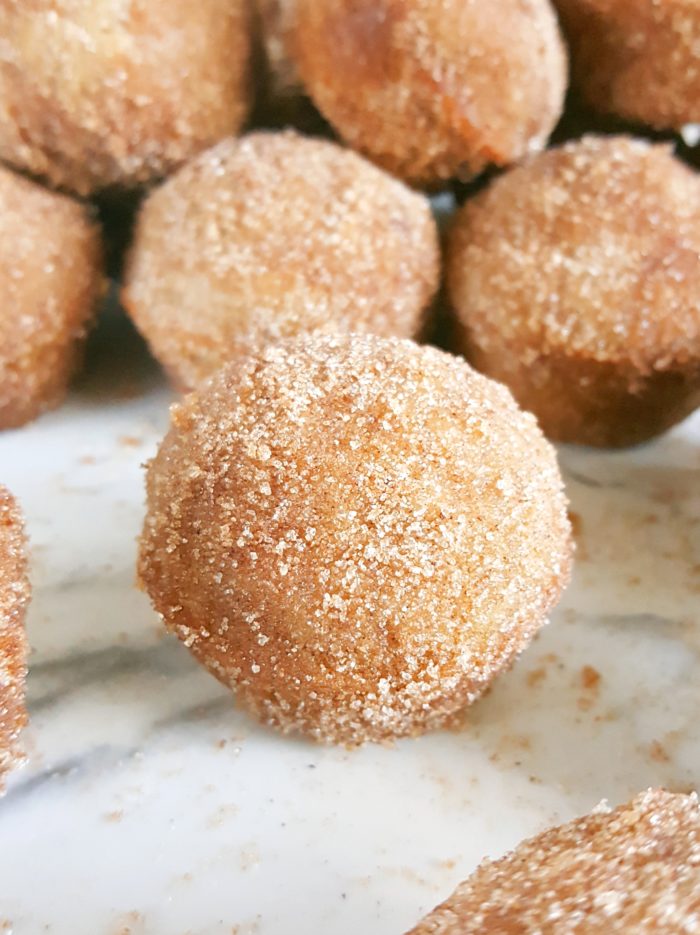 What to make with Cinnamon Sugar:

Muffins that taste like donuts are one of the best kinds.

And watching my favorite t.v. show, while munching on a big plate of cinnamon doughnut muffins, is one of my favorite ways to spend the weekends. 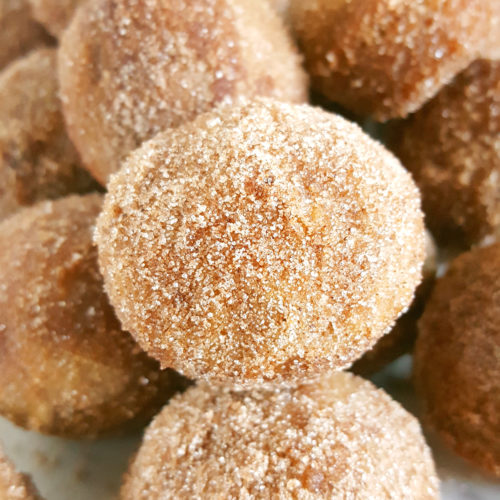 Crystal | Beat Bake Eat
An easy recipe for mini old-fashioned sour cream donut muffins dipped in butter and coated in cinnamon sugar. These muffins are perfectly spiced, soft and delicious. Have these baked doughnuts for breakfast or dessert!
5 from 9 votes 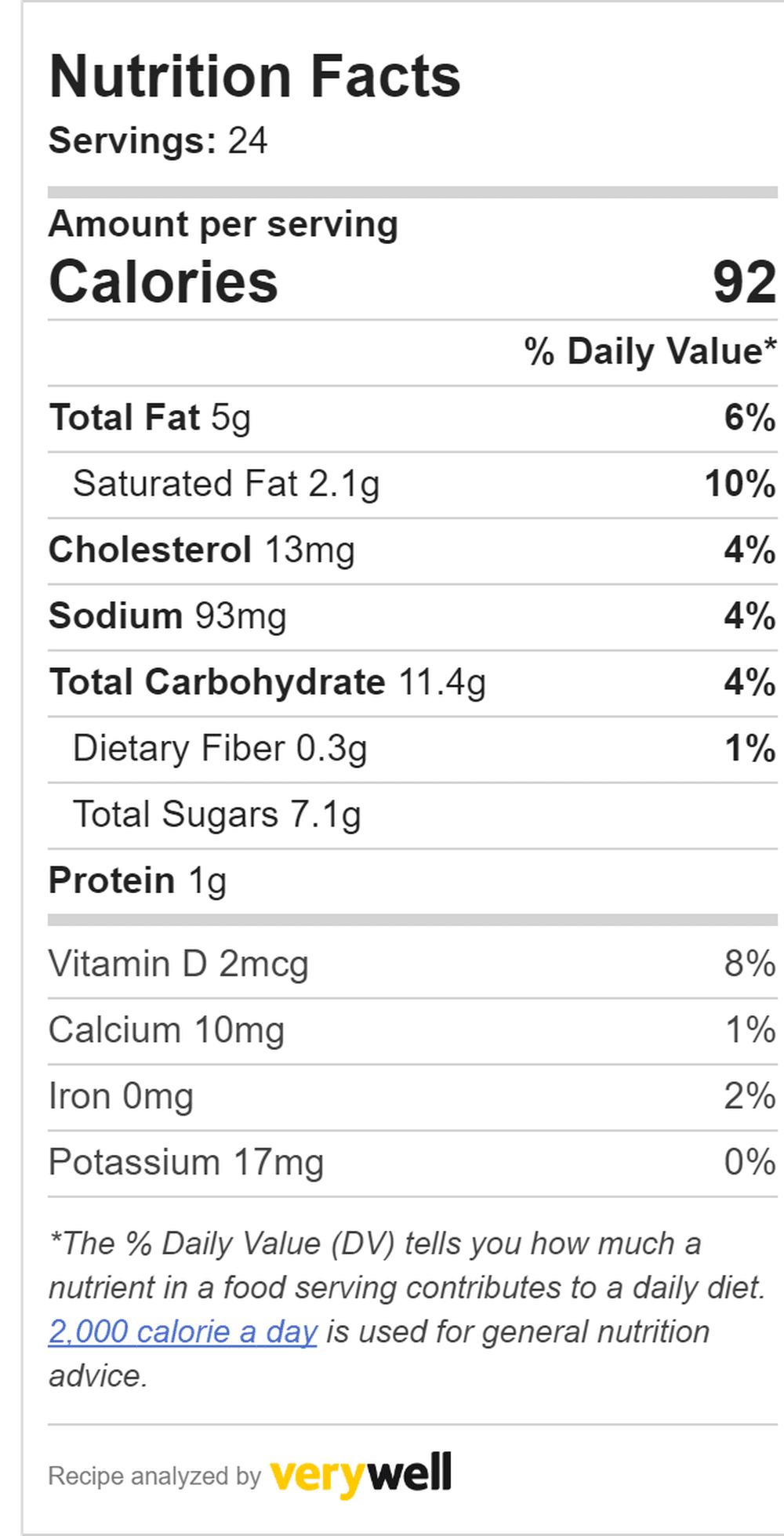 © Beat Bake Eat. All images & content are copyright protected. Unauthorized use and/or duplication of this material without written consent from this site’s author and/or owner is strictly prohibited.
Keyword baked donut holes without pan, homemade donut muffins, how to make mini donut muffins
Tried this recipe?Let me know how it was!
Tweet
Pin954
Share
954 Shares
16 comments
0
FacebookTwitterPinterestEmail
Previous Post

These are perfect! Perfect for taking to my women’s morning group at church. Nothing better than baked-at-home goods! If I have a sweet, I don’t want it store bought! Thanks for sharing.

Thank you! I agree.

Wow….just made these! Simply delicious!

Thank you so much for the 5-star review, Maureen! So happy you like them. 😊

We are at home in isolation for the COVID-19 pandemic and this definitely satisfied my craving for cinnamon sugar donuts. Thank you for posting the recipe!

So happy to hear that! Thank you for leaving a 5-star review. Stay safe. ❤️

These mini muffins seem delicious. Do I have the same result if I use greek yogurt instead of sour cream. Thanks

Yes, you will have an almost identical result. Sour cream and Greek yogurt are used interchangeably in baking all the time.

This are seriously delicious! They took more like 13 minutes to bake for me, however all ovens vary. They are simple and yuuuuummmmy! I am going to make them with my baking club tomorrow (I am a teacher and host an after school baking club). Thanks!!

True, they do vary. Oh, that sounds wonderful! I’m glad you like the recipe. Thank you for taking the time to leave a comment.

I don’t have a mini muffin pan. Are the directions the same for a full size muffin?

Yes, just divide the batter evenly between the muffin cups and bake for 16 minutes (maybe more) until a toothpick inserted into the center comes out clean.

Can these be made as a normal sized muffin? Would it bake similar?

I love these muffins and have made them more than once for brunches. My latest brunch was canceled due to illness. Can they be frozen for the rescheduled date?

It’s so good to hear that you love this recipe! Sure, I think they can. I recommend freezing them spaced out in one layer on a parchment lined baking sheet until solid first. This should prevent them from sticking. Then just toss them in a zip-top bag or wrap them in foil.