Easy one-bowl recipe for homemade fudgy brownies made with brown sugar, cocoa powder and one egg. So simple but yet so rich and decadent! 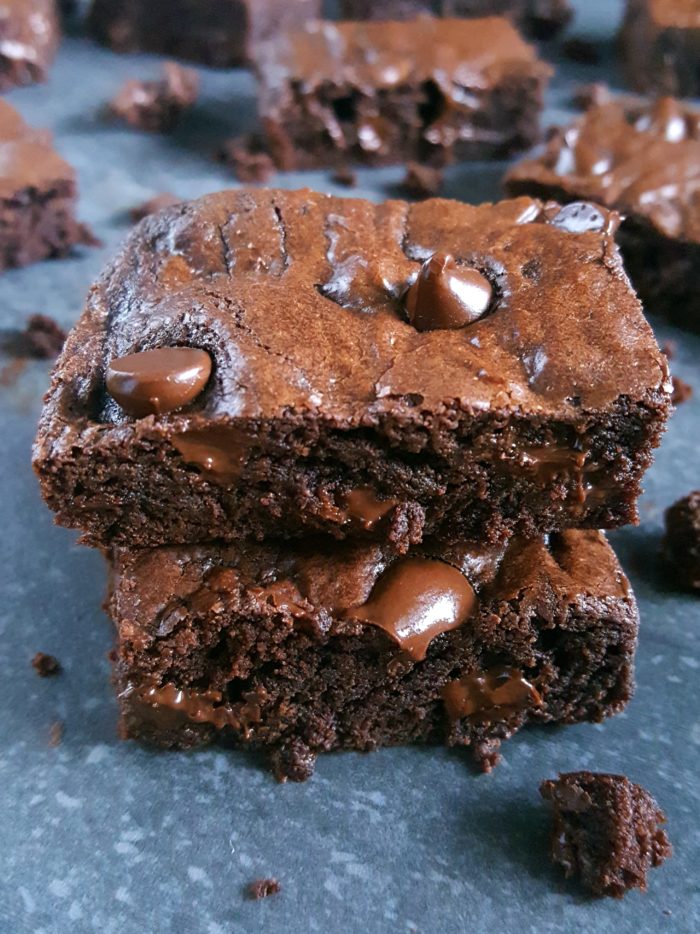 After attempting to make chewy brownies a couple weeks ago and failing, I decided that I was not going to be testing and tweaking the recipe dozens of times just to get the texture that I want. So I resorted to my trusty blondie recipe. It’s a foolproof recipe that comes out perfect every time so I thought why not make the chocolate version. I swapped out some of the flour for cocoa powder and it worked out perfectly. I also decided to add some chocolate chips to make them chocolate chip fudge brownies. The chocolate chips are obviously optional but I find that brownies with chocolate chips/chunks are better than those without. 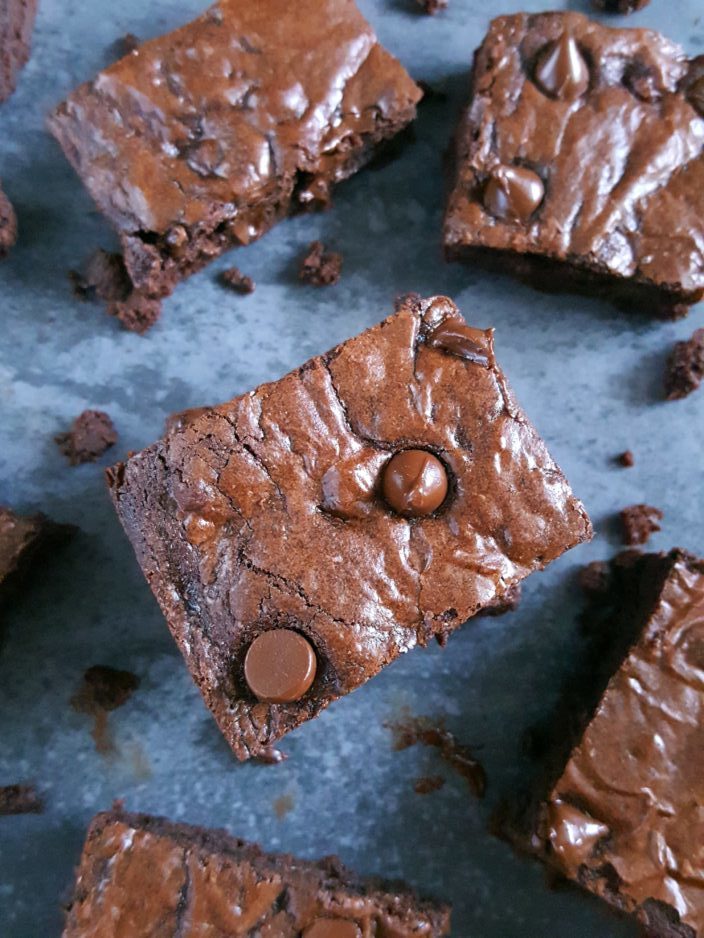 This has become my go-to recipe for fudgy brownies with cocoa powder. Maybe I’ll create an even better recipe in the future but this one is pretty solid. I don’t see myself topping this one.

It’s a one-bowl brownie recipe with simple ingredients that can be made without a mixer and comes together in minutes.

For the way these brownies turn out you’d think that you’d need to be mixing for an hour or add a special ingredient, but no. This recipe is quite simple.

Some brownie recipes call for only white sugar while others call for both white and brown. This recipe calls for just brown.

I didn’t use white sugar in this recipe because I was aiming for brownies that are super fudgy and or chewy. Either one would have worked for me and I managed to get that amazingly fudgy texture with minimal effort and I love it. Plus, I prefer brownies with brown sugar.

Using solely brown sugar made these brownies soft, moist, and rich in flavor. They’re also thicker and darker in color than their white-sugar counterparts. And if you didn’t know this already, baked goods with chocolate and brown sugar always turn out flavorful and moist. Always.

The amazing thing about these brownies is that even though they contain no white sugar at all, they still manage to have that crackly top that is such a popular appetizing characteristic of brownies. I’m not quite sure how they turned out with the shiny crust but I’m not complaining! See, this is why I love baking. I always learn something new and there are so many surprises.

Almost all brownie recipes call for at least two eggs. Eggs are responsible for binding the ingredients, moisture, and lift. By only using 1 egg for this recipe it takes out some of that lift that creates a cake-like texture and produces a fudge-like texture instead. 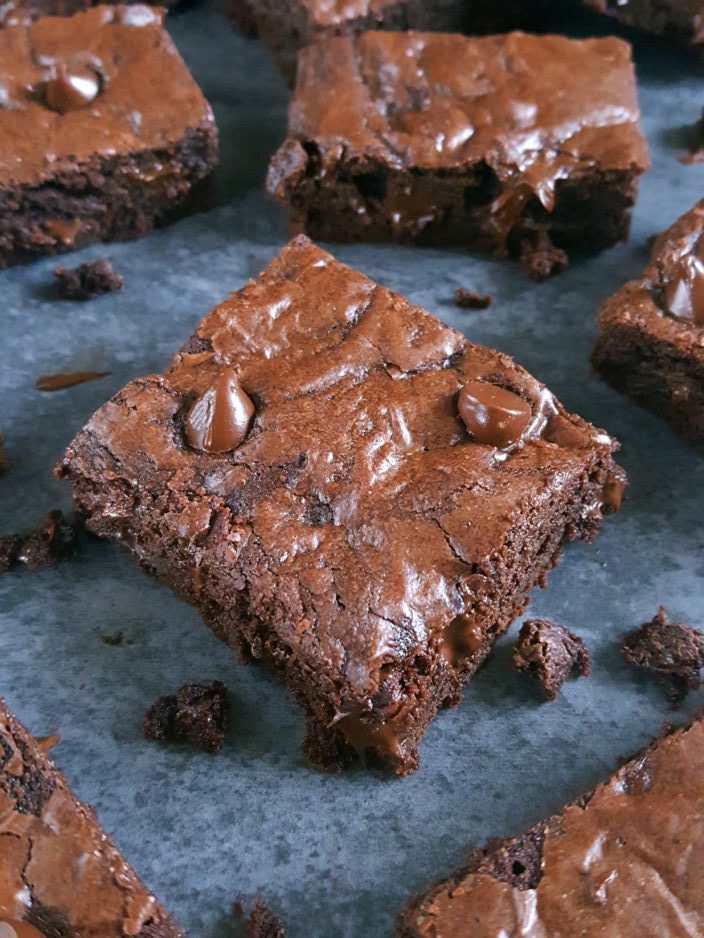 Using real chocolate to make brownies is always good however, using cocoa powder is great too. Cocoa powder is actually packed with more chocolate flavor because it isn’t diluted with milk, water, or sugar which yields brownies that are rich. Making brownies without chocolate is also more convenient. I almost never have baking chocolate on hand but I always have a big tin of cocoa up in my cupboard.

How to make Brownies Fudgy 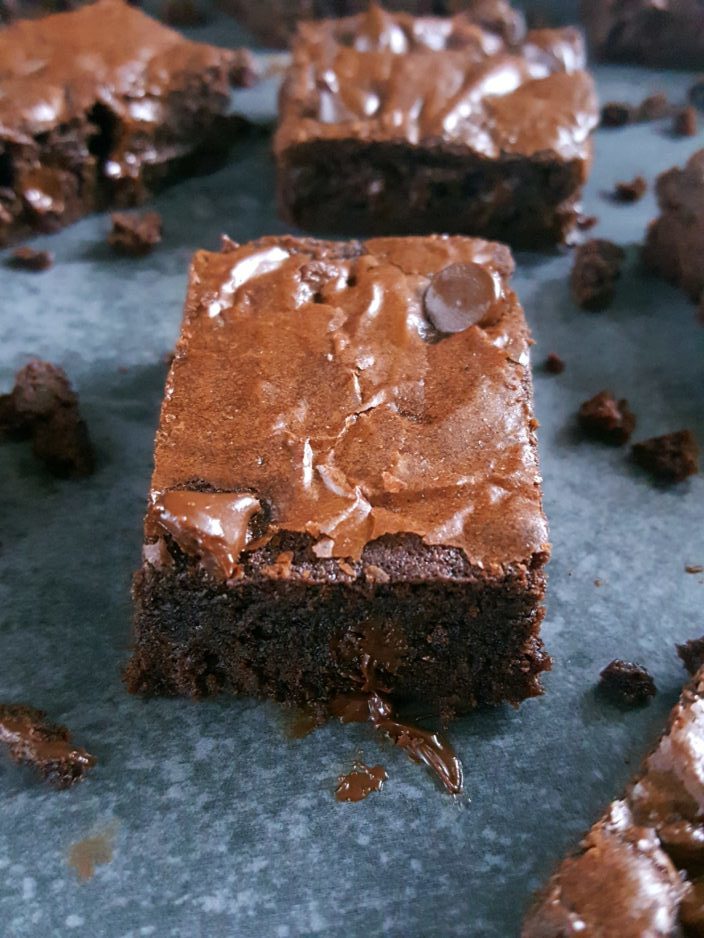 How to make Fudgy Brownies with Crackly Tops

You’ll see just how fudgy these are before you even put them in the oven. That’s right, I said before because the batter is so thick. When you start spooning it into the pan you’ll just know that these are going to be exactly what I promise you they’ll be. And don’t forget to like the spoon!

Speaking of which, make sure to scrape the bowl. Get as much batter into the pan as possible. We’re not letting any of that chocolate goodness go to waste.

Although this is an easy brownie recipe, there is some waiting required. After baking you have to wait for them to cool completely before slicing. This takes about 25 – 30 minutes. I know, I know, but it’s a small price to pay. 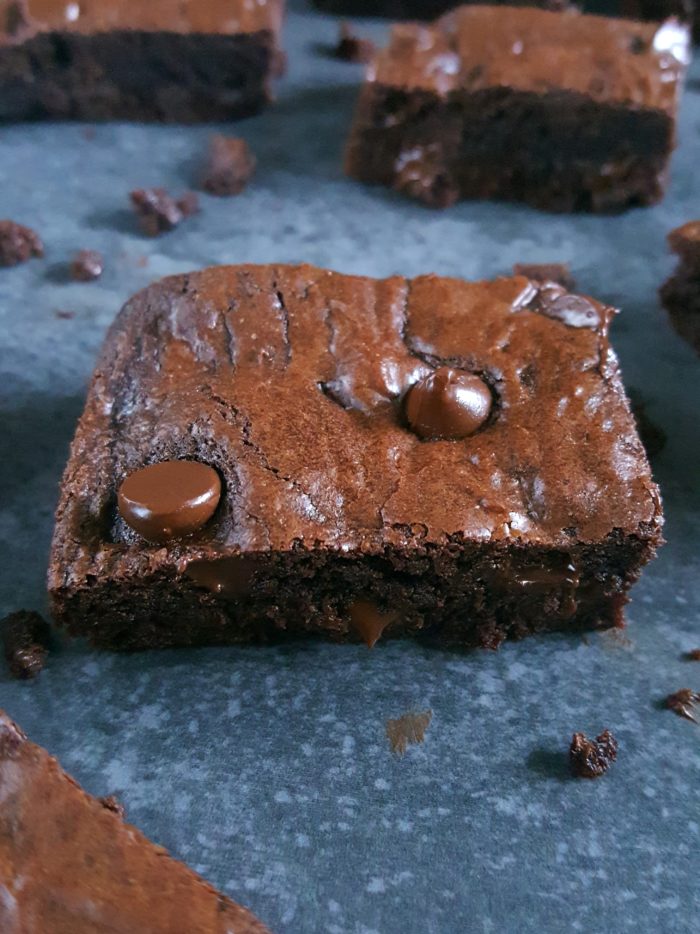 How to tell when Brownies are done baking

These brownies are done when the center is set to the touch and slightly under baked (no longer completely raw). If you stick a toothpick in the middle there should be just moist crumbs sticking to it. Unlike most brownie recipes, it’s not that hard to tell when these are done. But it’s very important that you do not over bake the brownies.

Taking the brownies out of the oven while they are still under baked will ensure that the end product is not dry and hard. You want to keep as much moisture as you can so that when the residual heat from the pan continues to “bake” the brownies they’ll still be soft and moist on the inside. 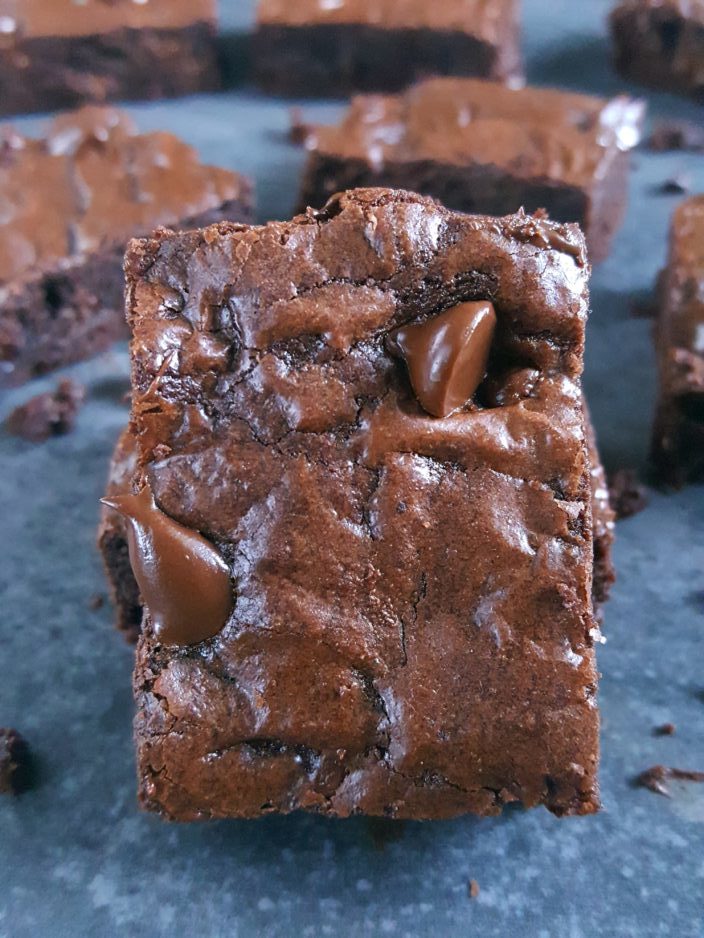 How to store Brownies

Store sliced brownies at room temperature in an airtight container or cover tightly with foil. I find that they start to get stale after two days so it’s best to eat them while they’re fresh. 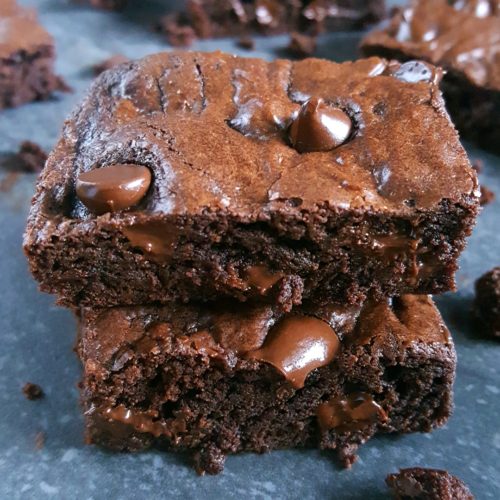 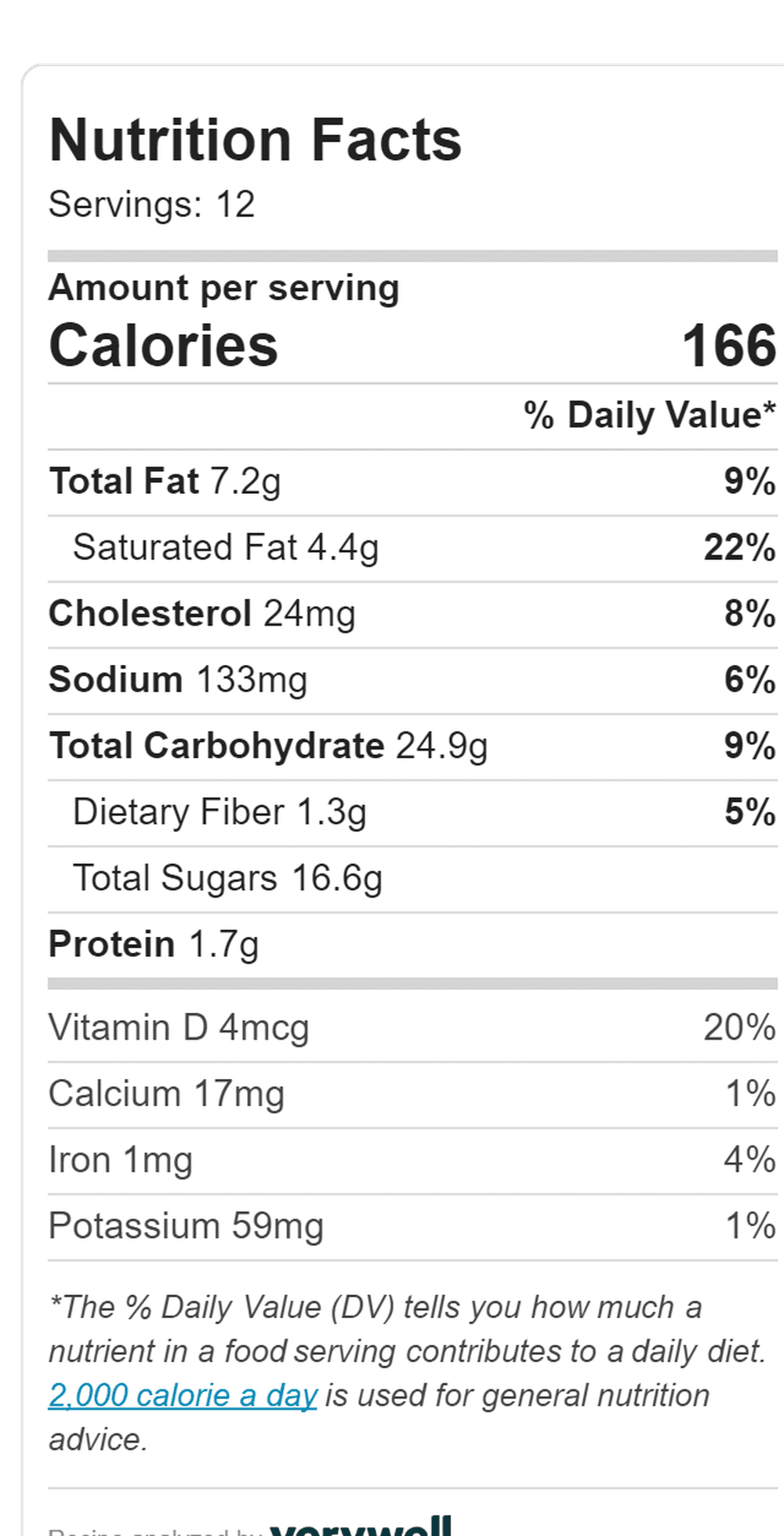 Calories: 166kcal
Keyword brown sugar brownies with cocoa powder, how to make brownies fudgy, one egg brownies
Tried this recipe?Let us know how it was!

How to make Brownies with one egg

For me this ended up like a giant chocolate cookie. They tasted really good and were very soft, but nothing about this was brownie-like.

Brownies come in all different textures; soft, chewy, fudgy, cake-y, gooey. It’s all about preference. These brownies are fudgy (hence the name of the recipe). They have the same texture as blondies which are very similar to gooey cookie bars.

is there supposed to be any leavening agent like baking soda or powder? we made them this evening and everyone loved them. they were very good!! will definitely make them again

I’m so happy that everyone loved them, Jen! Glad you’ll be making them again. And no, there are no leavening ingredients in this recipe. Adding baking soda or baking powder would make them cake-y instead of dense and fudgy.

Could I use two eggs to make the brownie bigger?

I’m not sure what you mean by “bigger”. Do you mean thicker/taller or just fluffier? Adding an extra egg would change the texture of the brownies by making them softer, lighter, and more cake-like instead of dense and fudgy but it would not make them bigger in size. If you want them to be larger (taller) you can try doubling the recipe, baking it in the 9×9 inch pan, and baking them for a little longer since there would be twice the amount of batter. Whatever you do try, let me know how it turns out!

Yum. Making them for a second time today, sheltering at home because of Coronavirus. The recipe seems a bit dry with 3/4 c flour but I will carry on as they were so good last time. I melted butter in a saucepan and added the other ingredients into the same pan, less dishes. I don’t use white sugar so this is a good recipe for me. Using non-organic cocoa powder this batch, Hershey’s, & will compare to my Saco Conscientious Kitchen Organic cocoa which I don’t want to run out of. I may be making these a lot in the coming months, thanks a lot Crystal!

Hmm, well since it came out great the first time you probably packed the flour or cocoa powder into the measuring cup the second time resulting in a drier batter. That’s the only thing I can think of. I’ve never used Hershey’s cocoa powder before but it does have good reviews. I’m glad you’ll be making these brownies again! Thank you for the 5-star rating. Stay safe.

It’s on the oven as I write but batter tasted good. Brownies are my super speciality but I am out of white sugar and I didn’t think it was right for my husband to run out for 5-6 things (most needful is sugar) in the current caronavirus crisis. I think they will work. I did add walnuts because my husband insists upon nuts in his brownies and chocolate chip cookies. Easy peasy receive.

You’re right. Best to stay inside. Those are great additions. Thank you for trying my recipe, Diane! Let me know how it turns out.

Oh, forgot: I live at high altitude, 8000 ft. I cooked the brownies for about 5 minutes longer. Is there anything else I should do? Thx

I don’t really know much about high altitude baking but I did a little research and it seems that the only thing you need to do for brownies is bake them a little longer, about 5 – 10 minutes (which you already did) and add extra liquid (milk, water, use extra large eggs, add an extra egg yolk, etc.) if the batter is too dry. I hope this helps! By the way, because you live at high altitude, this could be the very reason why the batter was drier the second time around.

These brownies sound delicious. I’m stuck inside due to coronavirus & have run out of butter. Can I substitute coconut oil? Thank you!

Yes, you can. Replace the butter with 3 tablespoons of melted coconut oil. You may need to bake for 1 – 2 minutes longer since oil is moister than butter.

This is the second time I’ve made these and I doubled the recipe. I’m Celiac so used gluten free flour (Cup4Cup). Turned out great. Really good when they’ve been chilled in frig!
Stay well!

Wow, thanks for letting me know that! I never thought of chilling them before. And it’s also good to know that this recipe works well with gluten free flour. You too, Mary! Thanks for popping back to leave a comment. I appreciate it.

YUMMY! I cut the sugar a bit and the emphasis was on chocolate! I used a combo of butter, coconut oil & olive oil. Easy and quick chocolate hit!

Was going to skip past this recipe because I’m in the UK and use metric measurements but glad I didn’t! Best recipe I’ve found for brownies, texture is spot on. I’m also coeliac and turned out great with a standard gluten free plain flour. Will make double next time as they disappeared too quickly!

Oh wow! So glad they turned out great for you, Katie. I agree, definitely double it. I’m working on the unit conversions for all of my recipes but it’s a lot harder than I thought. When it comes to baking, I am completely unfamiliar with weight measurements. Sorry for the inconvenience.

Hi Crystal! This is a great recipe and I’ve made it twice already — love it! Thank you so much for sharing it. I would like to make a bigger batch, though, so would you happen to know if this recipe doubles easily? I’m planning to make it in a 12×8 pan, if that helps.

You’re welcome! I’m happy you like it. I’ve never doubled it myself but I don’t see why you can’t; it’s simple enough. I know this is obvious but all you’d have to do is bake it a little longer. Maybe 20 – 22 minutes.