These cream cheese snickerdoodles are pleasantly chewy and have the perfect amount of cinnamon. This is a no chill recipe without cream of tartar that is easy to make and oh so scrumptious! 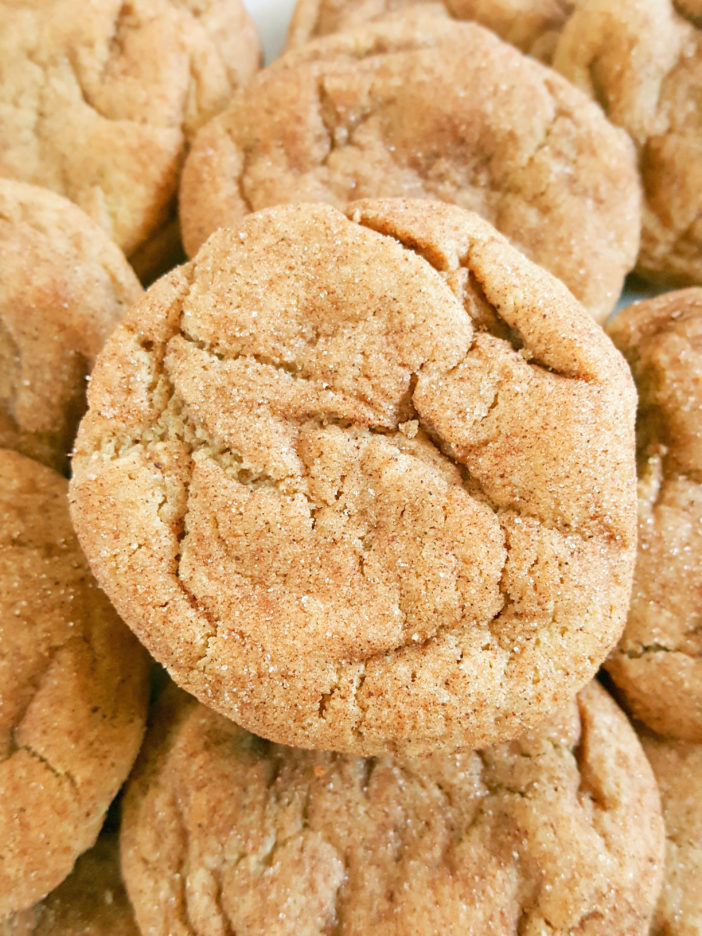 I adapted this cheesecake snickerdoodles recipe from my cream cheese chocolate chip cookies, that are melt-in-your-mouth good, by the way!

I had to increase the flour because I wanted these cookies to be softer and fluffier and closer in texture to actual snickerdoodle cookies as possible.

There’s just the right amount of cinnamon in this recipe. Half of it is in the cookies and the other is in the cinnamon sugar coating. It’s the perfect balance.

I used both sugars. Originally I was going to use mostly brown sugar, but because I was aiming for really soft cookies I decided to use mostly white. They ended up not even coming out soft anyway.

Even though it’s not the texture I wanted, they still tasted amazing. My family could not get enough of them. I ate one cookie and I didn’t care what the original plan was. The cookies tasted great, my whole family loved them, and that’s all that mattered to me in that moment.

After having these I’m in the mood for more cinnamon cream cheese dessert recipes. 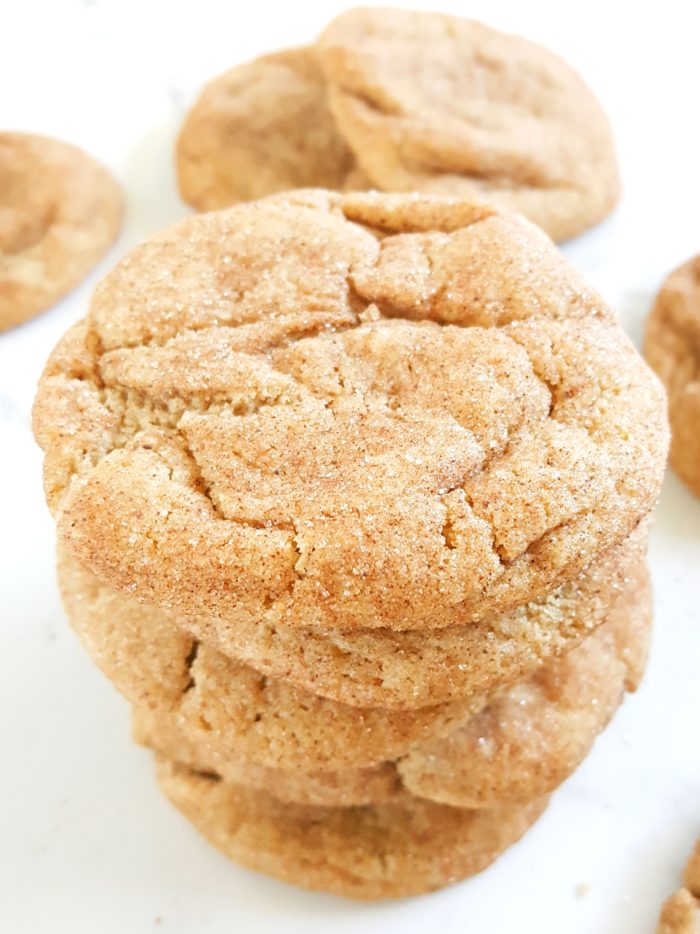 This recipe contains no eggs whatsoever. I’m not sure how it works but I noticed that after mixing in everything but the flour, the batter actually looked like there were eggs in it. It was very interesting.

The dough looks and feels just like regular cookie dough, and because there are no eggs in it you can eat a heaping spoonful without feeling too guilty. It tastes so good too! It’s soft, and buttery, and delicious. But don’t eat too much of it because then you won’t have any to bake with.

How to Quickly Soften Cream Cheese

The quickest way to soften cream cheese is to microwave it for 15 – 20 second intervals and mixing and breaking it apart after every interval until it is completely soft. Do not forget to remove it from the packaging!

You can use also cut it into small chunks, spread them out on a large plate, and leave it out at room temperature. It should be soft in about 20 minutes or less.

It’s very important that the cream cheese is completely softened before you mix it with the other ingredients, otherwise it will create lumps in the dough.

What kind of Cream Cheese to use

Use full-fat block or brick cream cheese. Do not use the spreadable kind that comes in a tub because that is much softer and specifically formulated to spread easily onto bread. When using cream cheese as a baking ingredient, the hard non-spreadable kind is ideal. 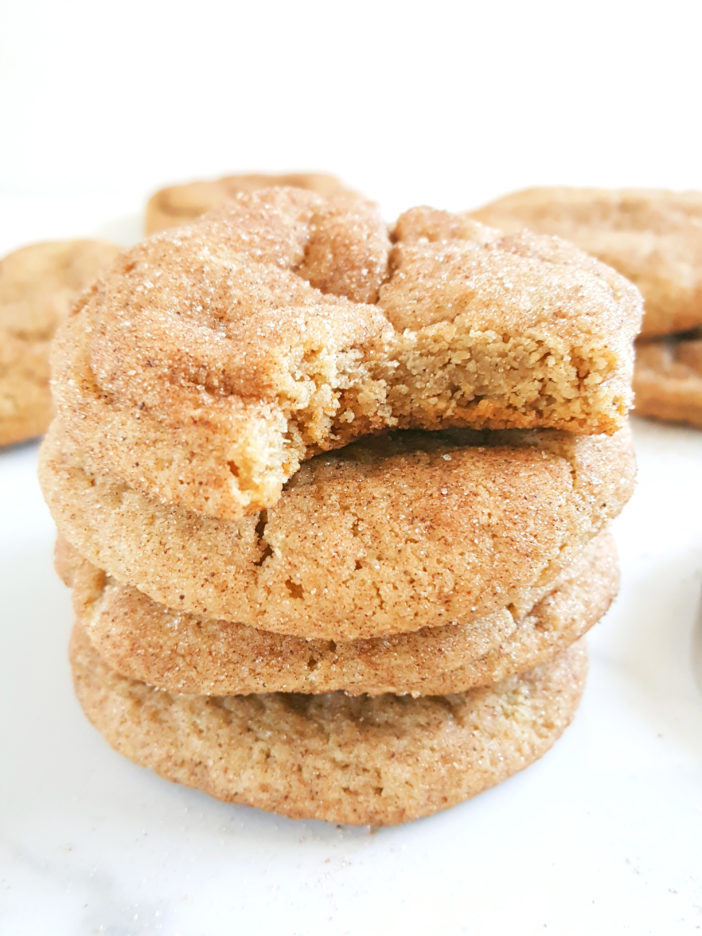 This recipe is very straightforward. The cookie dough takes about 5 minutes to make and I know that sounds like an exaggeration but I’m dead serious.

First you combine the cream cheese and butter, then add everything but the flour and mix well, then gently mix in the flour. That’s it.

What takes up most of the prep time is rolling the dough into balls and coating it in cinnamon sugar, which is pretty simple even though it’s a little more time consuming than making the dough.

This is a no chill recipe so there’s no refrigeration required and also, no cream of tartar, no baking powder and no powdered sugar needed.

You go from mixing to rolling, then straight to baking.

How to know when the Cookies are done baking

These cream cheese cookies are baked at 325 degrees Fahrenheit. I tried baking them at 350 but they got a little too crispy, which isn’t a bad thing however, I find the ones baked at a lower temperature were much better.

You’ll want to bake these snickerdoodles for 10 – 11 minutes. The longer you bake them, the chewier they’ll be.

They’re done when the edges are set and the centers are soft and slightly under baked. So basically if the very outside of the cookies are firm to the touch, it means that they’re done.

When they come out of the oven they’ll be a bit puffy but they sink as they cool.

It’s very important that you don’t over bake them because if you do, they won’t be nice n’ chewy. 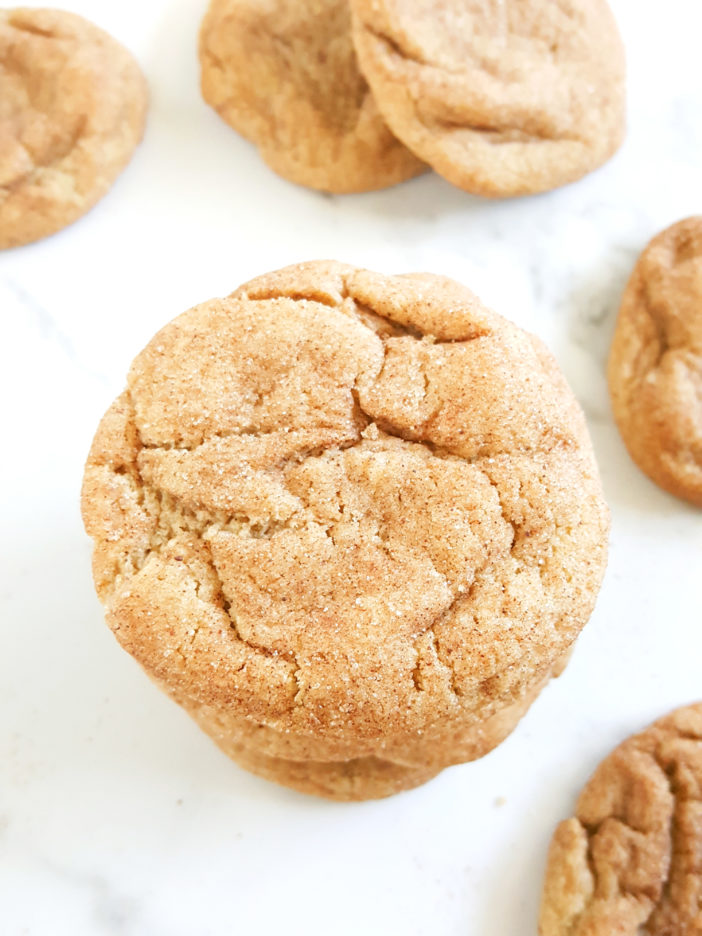 Store fully cooled cookies in an airtight container or resealable plastic bag. Surprisingly, they don’t dry out quickly so they can be left out uncovered for a few hours. And if stored correctly, they will last a week at room temperature.

No, they do not need refrigeration, but you can refrigerate them if you want them to last longer.

Also, if you want to freeze them, you can. They freeze really well!

This was my first time trying cinnamon cream cheese cookies and I love them so much. I love cinnamon cookies in general.

The unique thing about these is the flavor you get from the cream cheese. I can’t really describe it but it adds richness, a pleasant subtle tang, moisture, and it makes the crumb so delicate. It’s lovely. It’s different than your average cookie but in a good way.

If you give these cinnamon cheesecake cookies a try let me know how they turn out in the comments below. I love hearing from you! 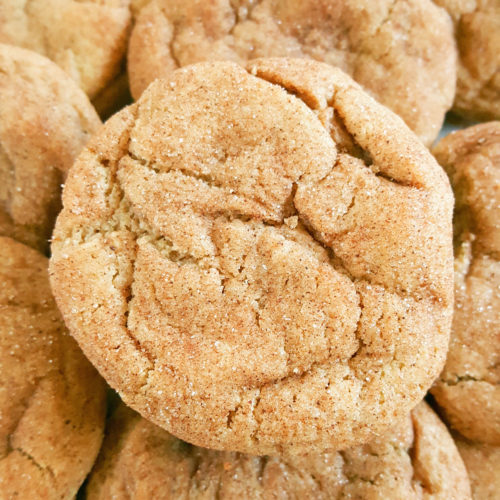 Crystal | Beat Bake Eat
These cream cheese snickerdoodles are pleasantly chewy and have the perfect amount of cinnamon. This is a no chill recipe without cream of tartar that is easy to make and oh so scrumptious!
No ratings yet
Print Recipe Pin Recipe
Prep Time 20 mins
Cook Time 10 mins
Total Time 30 mins
Course Dessert
Servings 24 Cookies
Calories 163 kcal

15 of The Best Mini Muffin Recipes